Private and public funding for biotechnology investments have occurred at a record breaking pace over the past twelve months. Incredibly, according to Forbes.com, the entire U.S.-based biotech venture sector in 2012 & 2013 invested roughly what was invested in Q1 2018. I decided to take a look at various data sources to better understand the impact of this recent uptick in biotech investment.

The chart below tells the story. 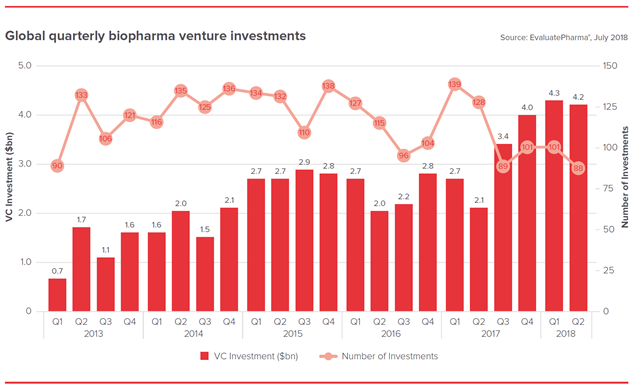 After analyzing the above chart, I noticed that total investment dollars were going up while the number of deals had declined. I decided to calculate the average deal size trend over the same period. You can see that the average deal size has increased over 500% (or $40M) from Q1 ’13 ($7.8M) to Q2 ’18 ($47.7M).  The Forbes article does a nice job of a detailed explanation of why this has occurred. I’ll quickly summarize in that increased funding, along with increased demand for biotech investments has increased overall company valuations (particularly those with good management teams and solid science). 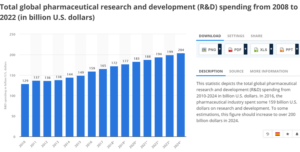 The recent 3.6% annual growth rate compares favorably to the US Consumer Price Index Trend (CPI) which has hovered at or below 2.5% for the most part since 2009 (although it has been on an upward trajectory since 2015).

I was interested in comparing R&D spend by the top 30 pharma companies (based on revenue) and the rest of the industry. Thanks to Pharmaexec.com, I was able to quickly compile annual R&D spend for the top 30 pharma companies since 2010. You can see in the chart below that total R&D spend for the top 30 increased from $94B to $104B ($10B increase), while all other companies increased their spend from $35B to $61B ($26B increase). More than 25% (or $7B) of that increase occurred in 2017, I would assume a lot of that biotech funding began working its way through the system. 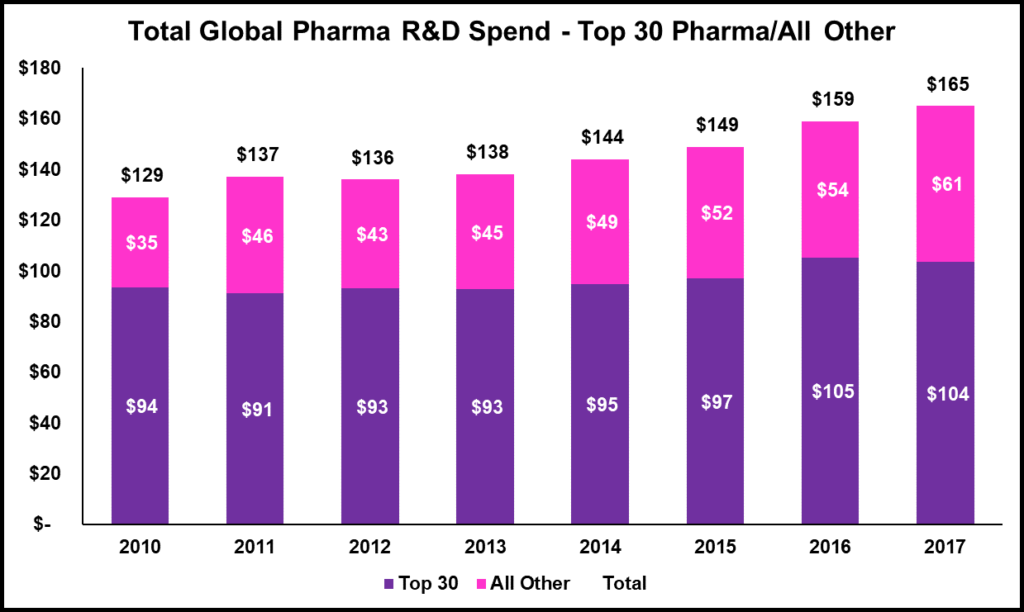 Another way of looking at the data is that the top 30 pharma companies represented 63% of total R&D spend in 2017 (down from 72% in 2010). All other companies now make up 37% of total pharma R&D spend, with the clear potential to increase as funding continues to grow. 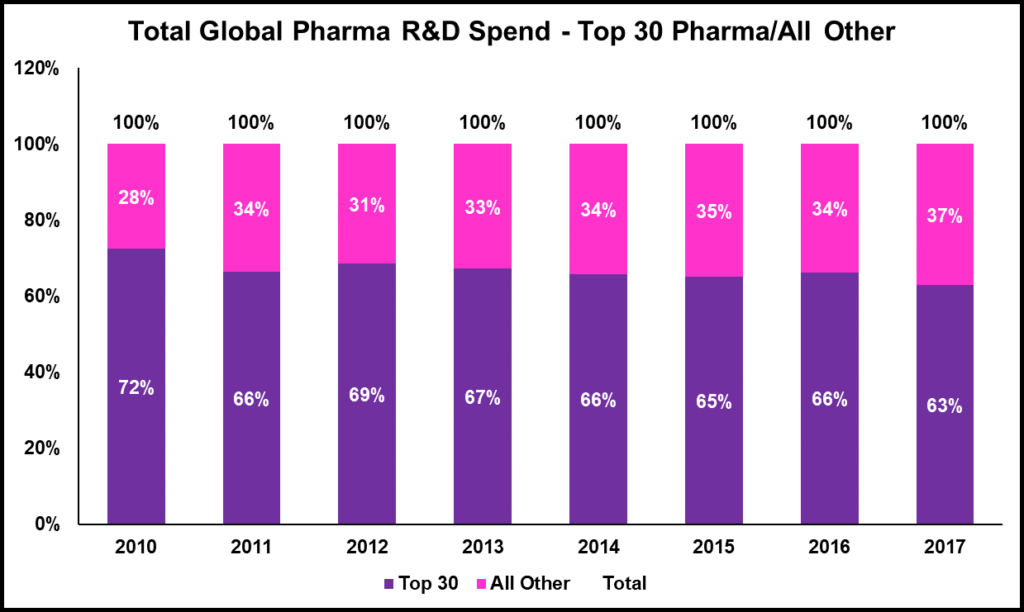 Lastly, the below chart displays the average growth rate between the two segments since 2010. Top 30 pharma R&D has grown on average 1.5% annually while all other at roughly a 8.1% clip.

Increase in # of Companies with Drugs in Pipeline 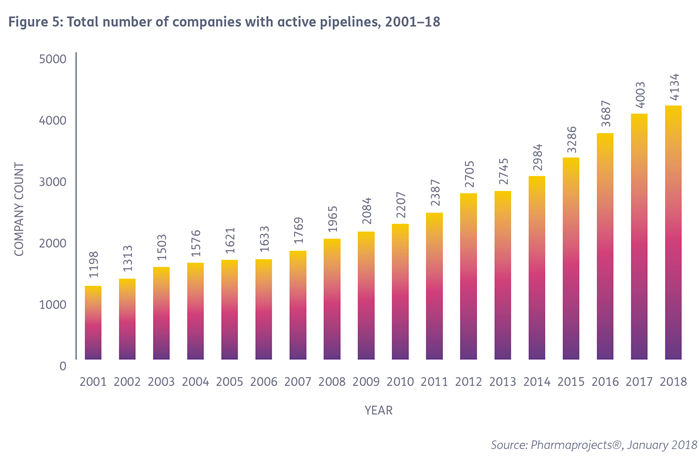 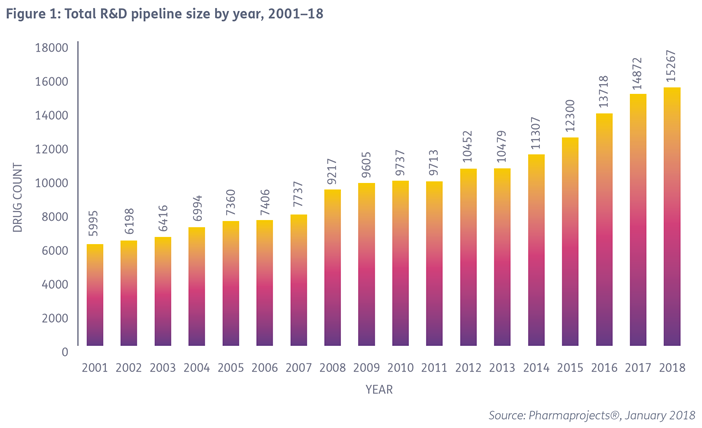 Per the chart below (as expected) the average pipeline per company has declined from 5 (in 2001) to 3.7 (in 2018). Easier access to capital and the ability to run a biotech with reduced infrastructure costs (i.e. use of CROs) has enable many biotechs to enter the market with only a couple of compounds. 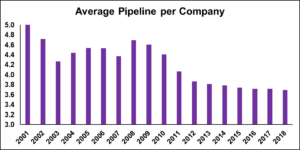 In summary we have seen significant increases in capital, companies and drugs in development. The question is: Have we seen a comparative increase in approved drugs? The answer is: Too soon to tell. The recent ramp up in overall investment, along with long drug development timelines suggest that it will be many years before we truly know if this recent investment influx translates into a material increase in approved drugs (and acceptable investor returns). The early results are somewhat promising.  The chart below shows the number of  approved drugs has in fact increased in recent years (with the exception of 2017). 2018 could potentially be the best year in the past decade with 34 drugs approved already through August. Assuming 2018 reaches 40 approved drugs, that would make 40 approvals in 4 of the last 5 years. From 2008 – 2012, 40 drug approval had not been reached. 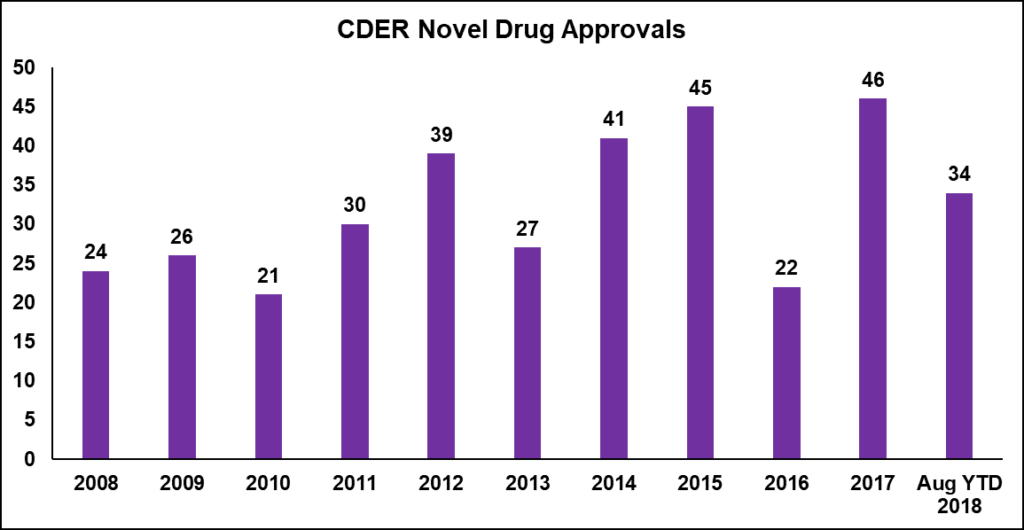 Having spent almost a year as CEO of Clinipace and previously CFO at Theorem Clinical Research for 5 years, I’ve seen these trends play out.  While all of these increases have been great for Clinical Research Organizations (CROs), we (CROs) must adapt our service deliverables to our ever changing customer base. Our customers not only need us to deliver on time with high quality, but we are also trusted partners and advisors. CROs play a huge downstream role in assisting with future funding rounds (i.e. did we deliver on time) and can provide helpful guidance on critical go – no go decisions (by way of protocol assessment, access to early study data and even early investigator feedback).  Having difficult sponsor conversations is never easy, but giving sponsors critical feedback is part of our mandate. Large investments do not guarantee positive outcomes (see Theranos), however CROs can improve client outcomes by not just “cranking the handle” but providing expert guidance and feedback.

About Clinipace
At Clinipace, a global, full-service contract research organization (CRO), our approach to clinical research is personal. We deliver a level of collaboration and flexibility not possible in a traditional CRO environment. With personalized services and solutions, local regulatory expertise and therapeutic leadership, we overcome the most difficult industry challenges across all major therapeutic areas including oncology, gastroenterology, nephrology and urology, rare disease, and women’s health. We strive to improve the way clinical research is performed and impact the future of health care using the most advanced technology and a CHALLENGE ACCEPTED approach.
Worldwide Headquarters