Investor interest in biotechnology companies has been extremely high over the past several years. Previous articles have discussed the increase in biotech FDA approvals and how the biotech sector is creating a large shift in biopharmaceutical research and development. I decided to take a trailing 12-month look at biotechnology companies that went public in the United States. I leveraged online data provided by Nasdaq.com and Iposcoop.com to compile the chart below

A few caveats, the list below excludes secondary offerings – so there may be some companies that each of you track that are missing. Also, since I used lists provided by the sites, it’s possible I am missing a few IPOs or have companies that may not technically be biotechs but were included on the lists I imported. All that being said, I think the list below is a pretty good proxy. 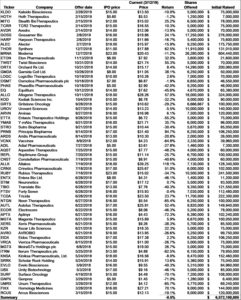 The chart below shows the trend of capital raised and IPO events over the past 12 months. June 2018 was a popular month with 16 IPOs while Q4 2018 saw a slow down with only 3 combined in November and December. February 2019 was a bounce-back month with 8. It will be interesting to see IPO flow in Q2 & Q3 of 2019 – hard to effectively assess as many companies confidentially file. 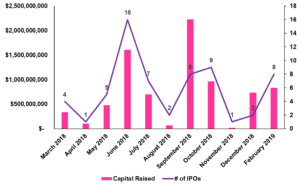 Investors on the Hunt for Unicorns

Unicorn Defined (Investopedia.com) – A startup company with a value of over $1 billion. Curious as to how many recent biotech unicorns there have been recently? Fortunately, Silicon Valley Bank put out a great annual “Trends in Healthcare Investments and Exits” report. Here is a visual of the “Unicorn” summary: 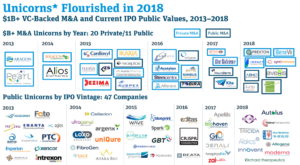 Pretty impressive group of companies to say the least. I decided to add a little perspective by adding up the sales values of the 2018 M&A unicorns to the total capital raised from our 62 company list above.

Amazing that eight 2018 M&A exits generated $27B more cash than our 62 IPOs while three exits (Juno, Avexis & Impact Biomedicines) each generated a higher return on their own.

I get asked often if I think the money flowing to biotech will slow down (this is clearly on the mind of most CRO CEOs as a slowdown would reduce the amount of overall R&D). Below is a chart created by Ernst and Young that I found in a great Forbes.com article written by Healthcare contributor, Bruce Booth.  The blue line represents the number of public biotechs and the grey line the number of total public companies. 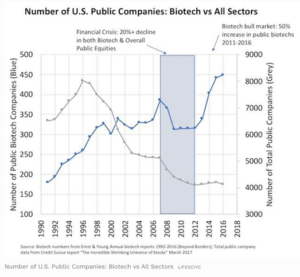 Why the spike in biotech IPOs? Mr. Booth provides the answer: “The lack of late stage capital at this scale, willing to support another chapter as a highly valued private company, helps crystalize the IPO benefits to a biotech: it’s really the only way to access significant amounts of growth stage capital in the sector.” Biotech companies seen to have made the decision that the access to capital outweighs the extra scrutiny and governance required when going public.

Will current biotech funding continue to increase into perpetuity? No, economic expansion and contraction tend to be cyclical (we can’t forget the dot.com era or the real estate meltdown). However, I do believe the biotech sector will continue to receive significant investment interest for the following reasons:

The rapid advancements in science can be overwhelming, but fortunately, the potential is also breathtaking.

I received a lot of great feedback from the last book I posted (“Irresistible: The Rise of Addictive Technology & The Business of Keeping Us Hooked”), I thought I’d share another one.  “The Breakthrough: Immunotherapy and the Race to Cure Cancer” by Charles Graeber is a fantastic read for anyone interested in learning more about immunotherapy. Mr. Graeber does a great job of providing the history around immunotherapy, recent developments, and some uplifting and heartbreaking stories along the way. Mr. Graeber’s writing style makes it easy for the reader to understand a complex topic. I highly recommend this book – it’s a great read.

About Clinipace
At Clinipace, a global, full-service contract research organization (CRO), our approach to clinical research is personal. We deliver a level of collaboration and flexibility not possible in a traditional CRO environment. With personalized services and solutions, local regulatory expertise and therapeutic leadership, we overcome the most difficult industry challenges across all major therapeutic areas including oncology, gastroenterology, nephrology and urology, rare disease, and women’s health. We strive to improve the way clinical research is performed and impact the future of health care using the most advanced technology and a CHALLENGE ACCEPTED approach.
Worldwide Headquarters